Resort Islands in the Whitsundays 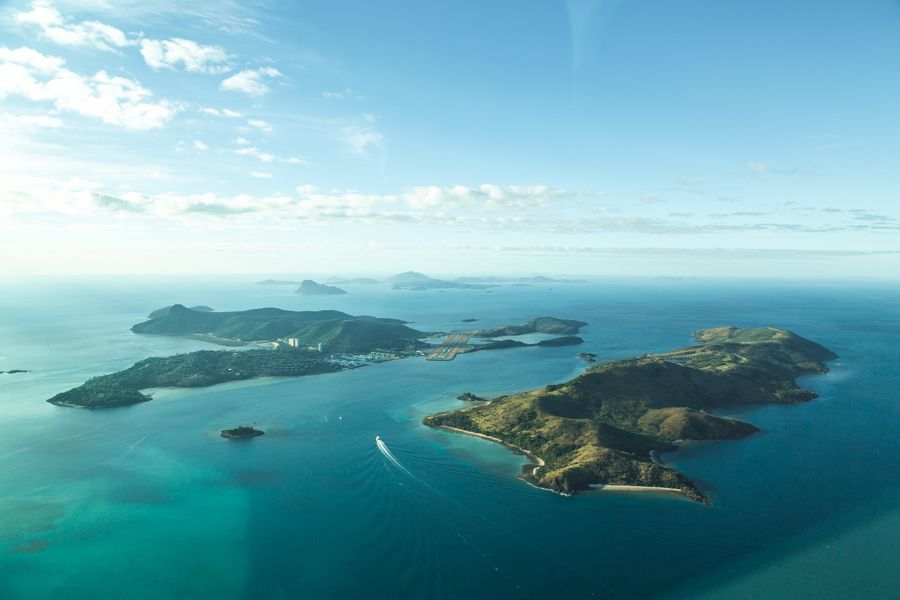 The Whitsundays Islands are a chain of 74 islands located off the tropical northeastern coast of Australia, in the Great Barrier Reef Marine Park. Since the birth of tourism to the area, the islands have long since been a favourite holiday destination for people from all over the world. Several of the islands have housed popular resorts over the years where holidaymakers have been able to enjoy the laid back pace and experience island time.

Regardless of leaseholders on these resort islands, the majority of the Whitsundays are declared national parks, with specific zoning on the developed islands protecting the land from over development. Over the many years that the Whitsundays has been a go-to destination, several islands have been host to resorts. The islands include Daydream Island, Hamilton Island, Hayman Island, Lindeman Island, Long Island, South Molle Island, Hook Island, Keswick Island and Brampton Island. While some have fallen into disrepair, others have withstood the test of time complete with multi-million dollar upgrades, and can still be visited today.

Hamilton Island is arguably one of the most popular islands in the Whitsundays. Originally a grazing island for cattle, deer and goats, original developer Keith Williams spotted the gem back in 1953 and later returned to take on the grazing lease and begin what would be a visionary development, turning it into the largest developed resort island in the Whitsundays. Keith Williams created the infrastructure, many of the resort foundations, marina and first airport on the Great Barrier Reef. Hamilton Island has a rich and tumultuous history, filled with delightful antics from the original owner. The resort was officially opened in 1982 and was most recently purchased by the Oatley family in 2003. Following an investment and development program reaching upwards of $650 million dollars since taking on the island, Robert Oatley and his passionate family made it the world-class destination it is today, including building the Hamilton Island Yacht Club and Villas, the luxurious 6 star resort qualia, and the Hamilton Island golf course, located on the neighbouring Dent Island.

The possibilities are endless on Hamilton Island, and they offer accommodation to suit every budget and requirement, from the relaxing and affordable Palm Bungalows (complete with a hammock!), the comfortable and family friendly Reef View Hotel, to the adults only exclusive boutique Beach Club, the 6 star luxury qualia, (preferred by Hollywood's elite) and hundreds of self contained holiday homes of all types. There are daily tours to Whitehaven Beach and the Great Barrier Reef, as well as over 60 water and land-based activities available on Hamilton Island, most of them free to guests. Catseye Beach is one of the most beautiful and swimmer-friendly beaches available in the Whitsundays complete with non-motorised water sports, and there are plenty more beaches you can make your way to by way of some of the 9 walking tracks available to guests. Buggy is the main mode of transportation, keeping the vastness of the island down to a small village feel. There are many ways to visit, including ferry transfers from the mainland through Cruise Whitsundays, flying into their domestic airport, arriving by private boat, or helicoptering in from a neighbouring island or the mainland. You can also visit for the day! 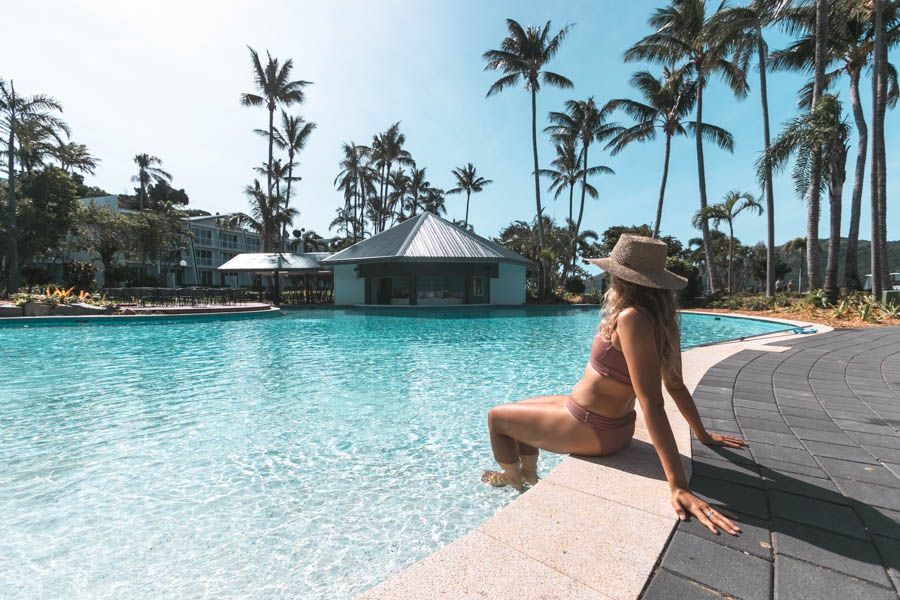 Daydream Island is a small resort island not far from the mainland of Airlie Beach. It used to be known as West Molle Island as part of the Molle group but was renamed Day Dream Island in 1930 when the lease fell to Major Lee Murray and his wife and their yacht Day Dream. The name was officially changed to Daydream Island in 1988. Daydream Island has had a busy history when it comes to ownership and lease agreements. Daydream’s most prolific owner was vitamin king Vaughan Bullivant, who developed the spa and outdoor Living Reef aquarium, the largest outdoor aquarium in the southern hemisphere, which wraps around the resort.

It has closed and reopened many times, and has recently undergone a full refurbishment after reopening in June 2019, after being closed for 2 years following Tropical Cyclone Debbie. Daydream Island is now owned by China Capital Investment Group, who purchased the island off of Bullivant in 2015. As a smaller island, Daydream is only 400m wide and 1km long. The quaint island resort is home to a plethora of wildlife, including rock wallabies, and its unique “Living Reef” outdoor aquarium, which has also had a major upgrade. Guests can now snorkel in the lagoon, as well as enjoy daily fish feeding and even view the underwater from some of the premium room’s bathrooms! Access to Daydream Island is provided by Cruise Whitsundays. You can also arrive by helicopter or just choose to pop over for the day. 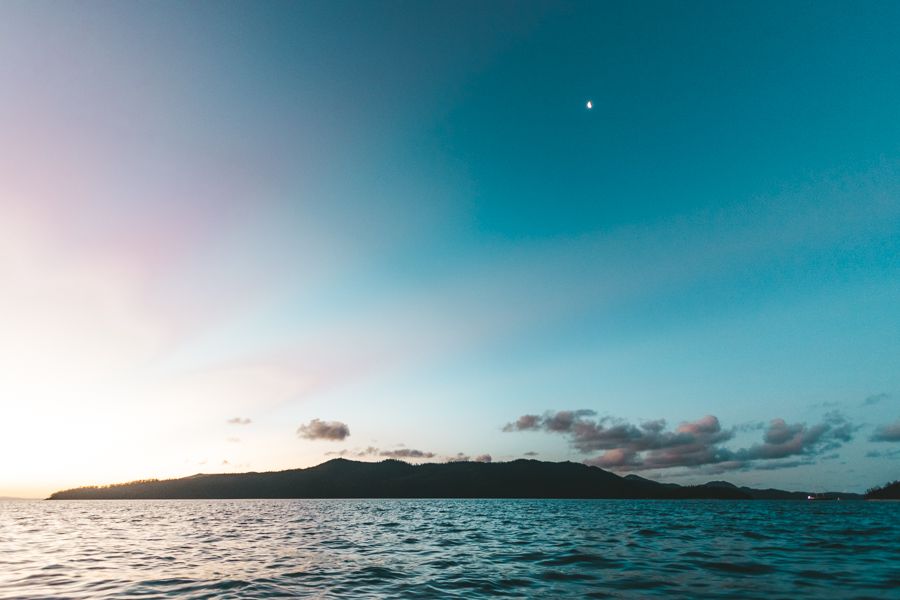 Hayman Island is another of the more currently well-known islands in the Whitsundays. Over the past years, it has gained status and reputation as a high-class destination for holidaymakers. It is one of a handful of islands that today remains under private leasehold. Over the years its well-being has changed hands many times and its purpose has varied, from being originally leased by the Abell family all the way to the Malaysian conglomerate Mulpha. Recently the management has changed from the One&Only brand to Intercontinental and is open following a full multi-million dollar refurbishment.

It has been used for scientific expeditions, grazing and as a resort island, as it currently is. Earlier versions of resorts on the island were demolished in 1985 whereupon a new resort was built at the cost of $300 million. Hayman is considered the other luxury island resort island, next to qualia and you’ll find most high profile celebrities stay at either of these properties when visiting the region. You can access it by booking with Hayman direct, and utilising their private ferry service or helicopter pad. 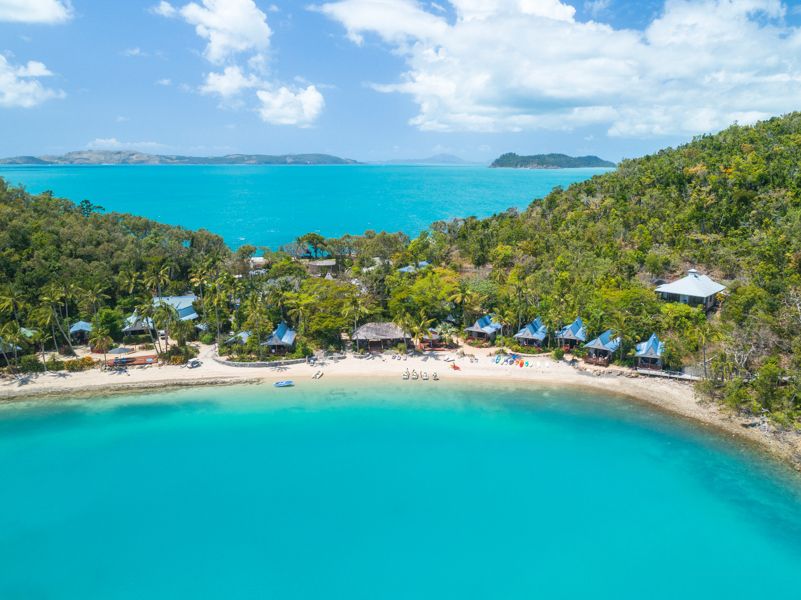 Long Island is another of the resort islands which has an open resort at present date. Its early days saw little activity outside of agriculture. The island is split between 3 separate leaseholders. It has housed resorts at Happy Bay and Palm Bay. Happy Bay resort has recently come under new management, trading as Elysian Resort, while Palm Bay Resort is still also still in operation following a refurbishment. Club Crocodile was rebranded as Breakfree Resort but has been closed for some years now. It is privately operated and runs as a BYO resort and has no phones, no TVs and no worries! Guests can contact the resort to arrange transfers over, as Cruise Whitsunday do not operate here.

Originally named for its shape, Hook Island was discovered by early settlers in the 1800s before eventually, the Abell family took out a timber lease on it, where they ran the hoop pine timber back to the mainland town of Bowen which was being developed. It had a brief stint as a research centre which had an underwater observatory which opened in May 1969. After the observatory was assembled and installed, old car bodies were placed around the sea bed to encourage coral reef growth.

Day-trippers used to be able to visit the observatory, which is still located on the island today, it is closed due to ventilation issues and is now overgrown with coral and in disrepair. Hook Island Wilderness Resort was the only operating resort on the island but has been closed for years now and the only inhabitants are security and an island caretaker. Nara Inlet allows access to the Ngaro cave paintings, a historical and archaeological site on the island open to visitors by boat access.

The past 40 years have seen the change of leaseholders many times on South Molle Island. It was used as grazing land in the late 1800s and early 1900s and hit the resort island market in 1937 when South Molle got its first resort. However, the resort was devastated by a cyclone in 1970. For many years after that, the lease changed hands many times again, with its newest owner as China Capital Investment Group, who also own Daydream Island. It is currently set to be redeveloped in the future. The resort is out of action but used to offer beachfront units and a separate area for backpackers.

Lindeman Island began its life as a resort island in the late 1920s. Its modest beginnings consisted of eight grass cabins that were built by the Nicholson family. The parents, along with the help of their children, continued to develop the island over the subsequent years. One of the children, Lachlan Nicholson and his wife, eventually took over operations and lived on the island until 1995. During this time the ownership of the resort changed many hands with its most recent owner as White Horse Australia. Lindeman Island was the first of the Whitsunday Islands to host overnight guests in the 1920s.

At the time it would have been very primitive accommodation as guests sought after the 'Robinson Crusoe' experience where they could enjoy spending time on a tropical island. This became a popular experience in the coming years and as the demand grew, more and more islands began to also host overnight guests. Club Med Lindeman Island resort was the most recent operational resort but closed down in 2012. While White Horse Australia currently has applications out for renovations, there is no immediate plan to reopen the island.

Brampton Island was a resort island in the early 1930s under Arthur and Jess Busuttin. It passed through several owners before being taken over by Trans Australia Airlines in 1985. Today, there is no operating resort on the island. In the future, it is said that the old accommodation buildings are to be removed and 6 new buildings will replace them. The proposed future resort is said to also have a golf course, tennis court, beach bar, rock pools and other facilities. It is currently under the lease of United Petroleum. While the closest mainland port is in Mackay, this is still considered to fall under the Whitsunday group, resting in the Whitsunday Passage.

Located in the southern Whitsundays Islands off of Mackay, Keswick Island offers a natural escape by way of camping and glamping in the midst of a national park. With very little infrastructure originally, the island has now developed fully self-contained accommodation. In early days, there was a leaseholder who attempted to start a nursery, however since there was no natural fresh water source on the island this endeavour was abandoned. What wasn’t though was a bee colonisation of purebred Caucasian bees which started in 1986. They still thrive to this day, and since they are free of disease, are often used to breed bees on the mainland. There is a small airstrip and you can access the island by small plane or private boat.

With so many resort islands to choose from, the Whitsundays offers some of the best options for creating your perfect holiday to the Great Barrier Reef. To find out more ways to see the reef, click here.