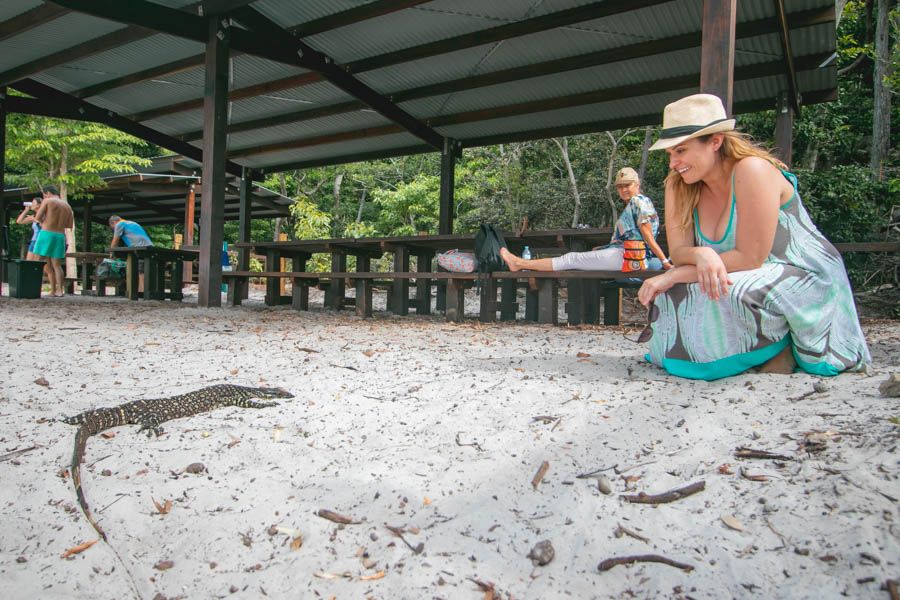 Known officially as the Australian Monitor Lizard, the Goanna is a common sight around the Whitsunday islands. These large predatory lizards can grow up to 2 metres in length and have sharp claws and teeth, making them a fearsome sight. Dark grey in colour with flecks of yellow along their bodies, they are most often seen clinging to trees and branches, or sunbaking on large rocks.

Goannas are potentially dangerous towards humans, although almost every recorded case of confrontation has come from a human being deliberately antagonising the Goanna. Their sharp claws and teeth can easily damage skin, and in several cases their powerful tails have knocked over small children. In rare cases, Goannas have mistaken human beings for trees, and have attempted to climb to safety, usually injuring the human in the process.

Despite this, Goannas are not widely considered as a threat to humans. Indeed in many parts of Australia, Goannas have grown past their fear of human beings, and often inhabit parks, camping areas and backyards in search of food. They are often very bold in such circumstances and will approach very close to human beings in search of food. When not around humans, the Goanna's diet consists of any prey it can catch and swallow whole. This includes other reptiles, birds, eggs and rodents.

Goannas have long played a strong role in culture of Australia's indigenous people. They are commonly depicted in indigenous artwork with strong spiritual meanings. They are also hunted as food, with the Aboriginal people considering them a dangerous but rewarding prey. Other myths surrounding the Goanna have survived through the white settlement of Australia, with many old stories about Goannas attacking and dragging sheep from the herd, as well as child snatching. It was widely believed the Goanna's bite was imbued with a mysterious venom, a fact that was not scientifically proved until several years ago. The venom, though now known to be prevalent, poses little threat to humans.

Goannas have also been harvested over the years for their oil, which was used by Aboriginal people as a traditional bush medicine for thousands of years, before also being adopted by white settlers. Goanna oil is still found in some medicines today, and can be purchased in pharmacies. It is often used for muscle relief from pain and inflammation.

The Goanna maintains a stable population throughout the Whitsundays, and can often be seen throughout the islands. One of the most common areas of sighting is the short walk from Tongue Bay to Whitehaven Beach, where they are often seen lounging in the trees above the path, or scampering away from approaching tourists.