A Day on Hamilton Island 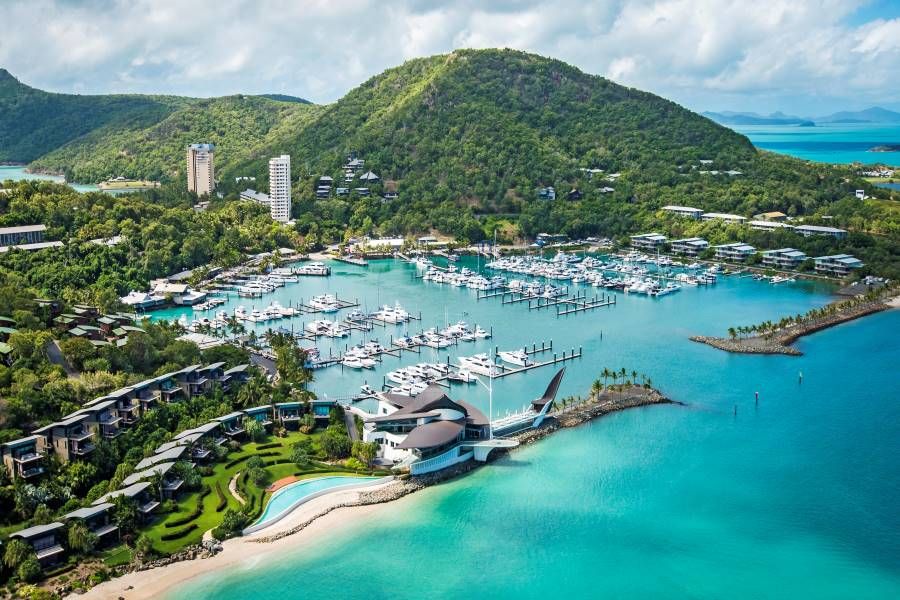 One of the most popular resort islands in the Whitsundays, Hamilton Island has become a world-class destination on the Great Barrier Reef and the Whitsundays over the decades. Complete with all the infrastructure and comforts of the mainland while still maintaining an island village feel, Hamilton Island is a must-see during your time in the Whitsundays. If you are short on time or want to taste test the different islands before booking to stay overnight, you can still indulge in this island escape for the day on one of several tours! 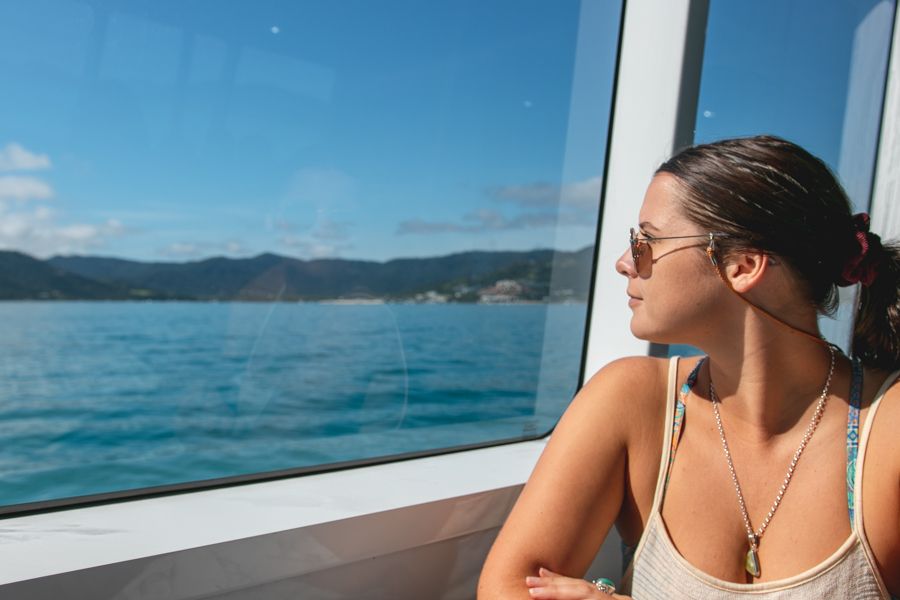 A Whale of a (Short) Journey

We boarded the ferry from the Cruise Whitsundays terminal at Port of Airlie, a short stroll from the main street on Airlie Beach. The sun just starting the day itself as we set out on our journey across the Coral Sea from the mainland. In the passage away from the hustle and bustle, there was only the odd sailing yacht and a few whales breaching in the distance disturbing the glass water. Whale season, we were told from the skipper on the overhead speakers, is from June to September, and we were lucky enough to be travelling through the water during the peak time to spot them. 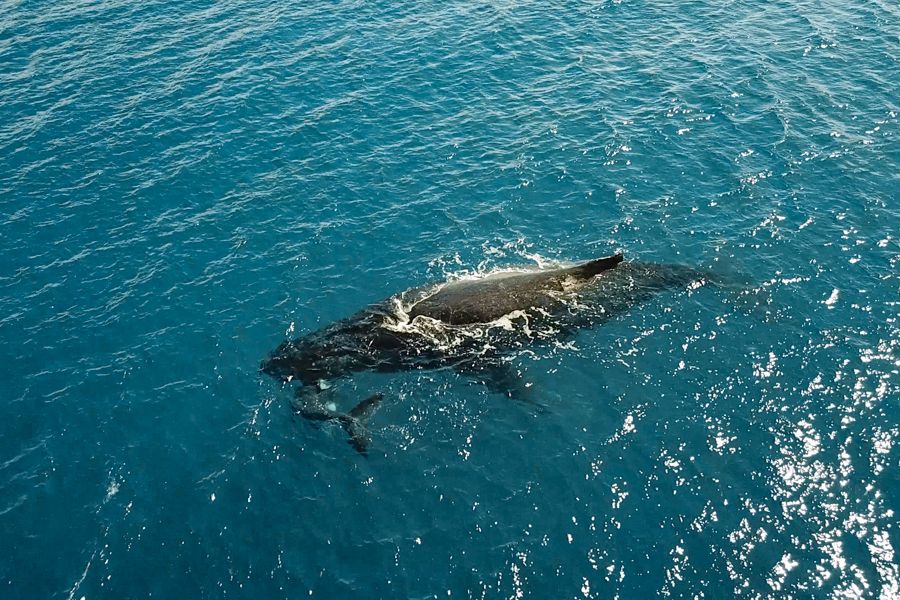 After what felt like a tour in itself, an island suddenly emerged in front of the ferry in the distance, as a couple of the islands holiday homes began to come into view. As we approached the marina, we were able to see how the other half lives… With multi-million dollar yachts cradled in their berths, the sun glaring off the multi-faceted Hamilton Island Yacht Club windows, and golf buggies zipping up and down Front Street, we had finally arrived at Hamilton Island. 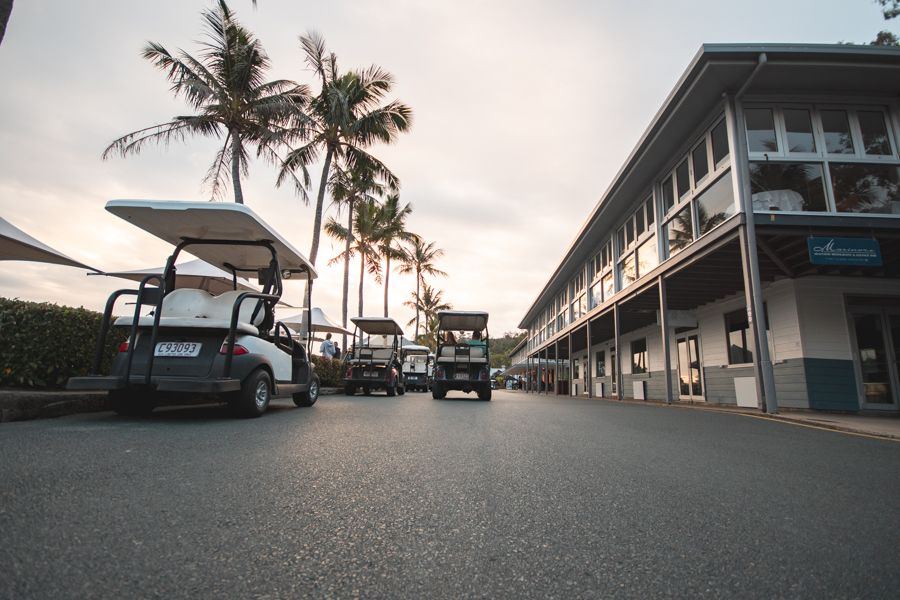 The Land of Buggies

Straight off the ferry, we could see why this truly is a world-class destination. The streets are clean, the air fresh, and the quaint marina precinct was bustling with little cafes and shops. There was nothing but the swish of wind as the electric golf buggies the island is famous for came riding past. We decided we HAD to hire one. 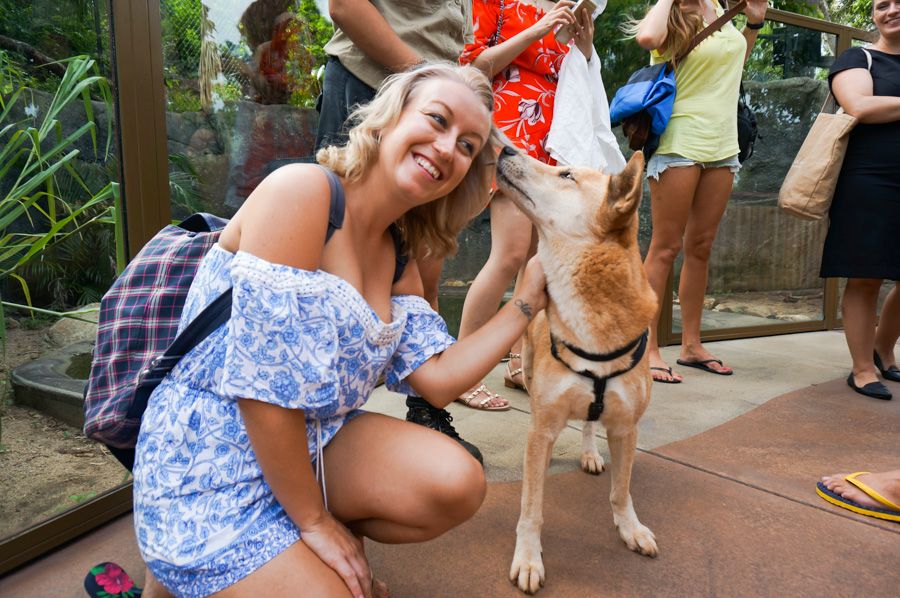 So Much To See

As the largest inhabited islands in the Whitsundays, Hamilton Island stretches over 5km², and 75% of the island is national parkland. There are 9 hiking tracks around the island, and 4 distinct points of the island: the marina precinct, the airport, the resort side, and past One Tree Hill, the luxury district, home to the 6-star qualia resort. You can also see the neighbouring Whitsunday Island, home of Whitehaven Beach and a short 25-minute boat ride from the marina!

Since the island is quite spread out, one of the preferred modes of transportation around the island is by golf buggy, but there are also convenient and complimentary shuttle busses, in which you can simply hop on or off at any of the destinations mentioned and more. We opted to take a quick stroll over the hill at Mango Tree Corner, (aptly named, and the main intersection of the driving roads on the island) to one of the two buggy hires on the island. 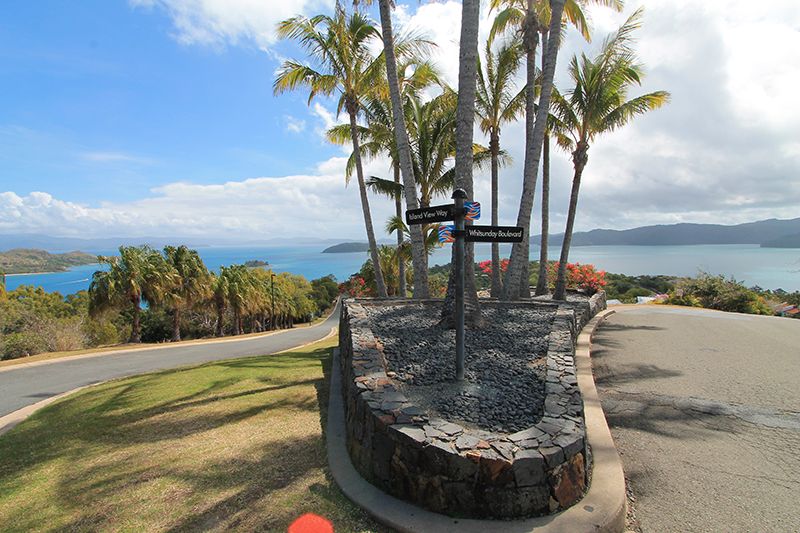 After a brief tutorial, we were on our way-Ready to explore what Hamilton Island has to offer! First stop, we decided to head up to One Tree Hill, to take in the 360 views of the surrounding islands. Conveniently located at the top is a little bar, complete with all-day happy hour cocktails and light nibbles. The friendly staff told us this place was pumping at sunset, as it has some of the best vantage points in the Whitsundays, and usually live music.

Heading back down to the marina side, we decided to check out what on the water activities were available, and we were pleased to have a multitude of motorised options at our disposal. Hamilton Island Watersports had everything from Jet Skis to banana boat and tube rides, to parasailing, dinghy hire and kayaking - There didn’t seem to be anything they didn’t offer. Having never done it before, we decided to try parasailing out, which to our surprise was more of an adrenaline rush than we expected! Taking us around the corner, we also had the chance to pass Qualia’s pebble beach with the wind blowing through our hair and feet swinging underneath our parachute we caught a glimpse of the beautiful infinity edge pool while keeping our eyes peeled for celebrities (unfortunately too far away to see). 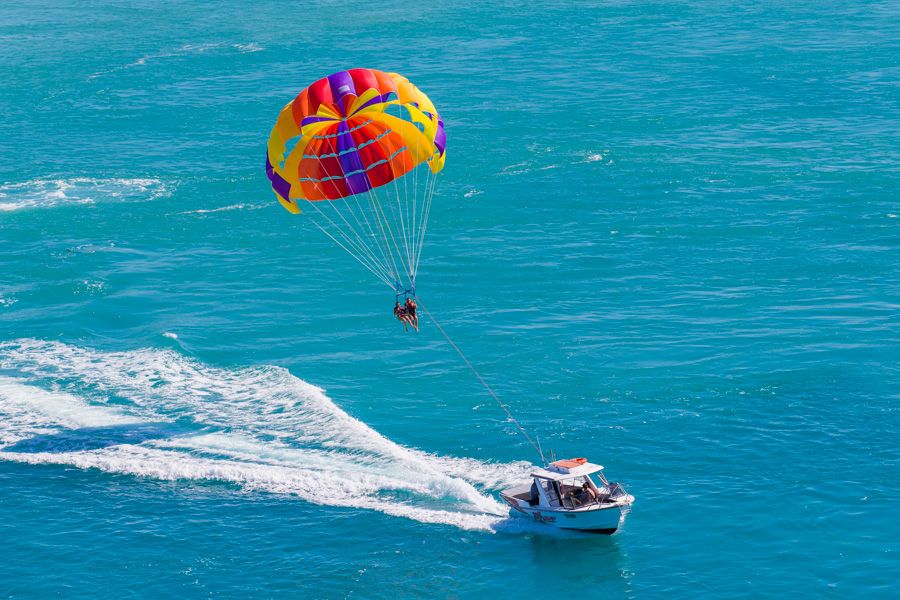 Upon returning to the marina, we saw all the many day tour options that take guests to Whitehaven Beach and the Great Barrier Reef as well. Tempting as it was, it would have to wait for another day - There was still so much of the island to explore, and we hadn’t even had lunch! Remembering our full-day tour included lunch, we parked our buggy up next to the marina side Manta Ray Cafe to refuel before setting out again. The Spanish tapas inspired restaurant had a relaxed atmosphere, and beautiful views of the luxury sailing yachts coming and going as we indulged in a plethora of Mediterranean share plates (and some Robert Oatley Signature Series Sav Blanc!). 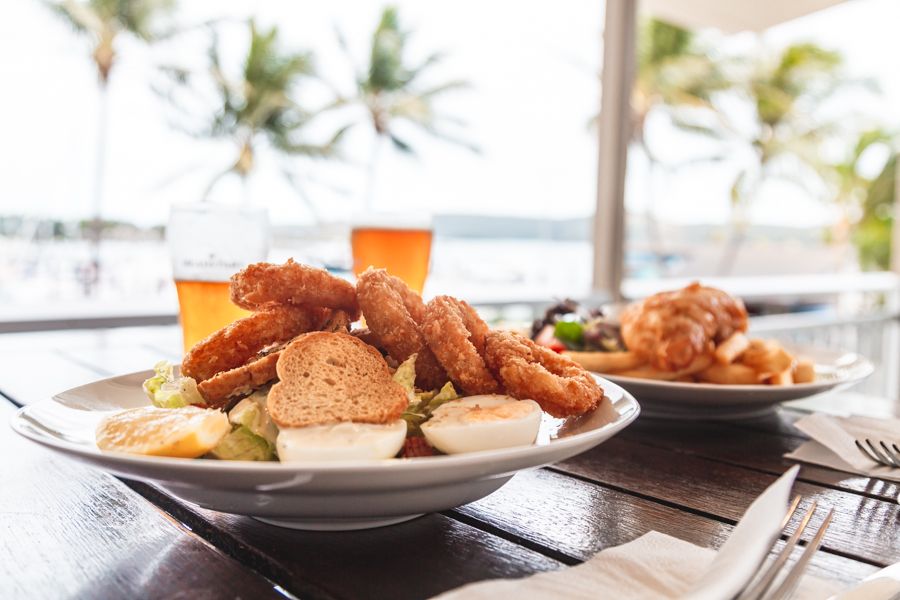 Take a Walk on the Wild Side

After lunch, we thought we would head over to the Wildlife Park (yes, wildlife park!) located over on the resort side. We were lucky enough to get there just in time for their private Koala presentation, in which we were able to go behind the scenes with the keepers and learn about the cutest little Aussie icons - We even got a photo as a keepsake! On our way out we stopped to see the dingos and emu, along with their resident saltwater crocodile. 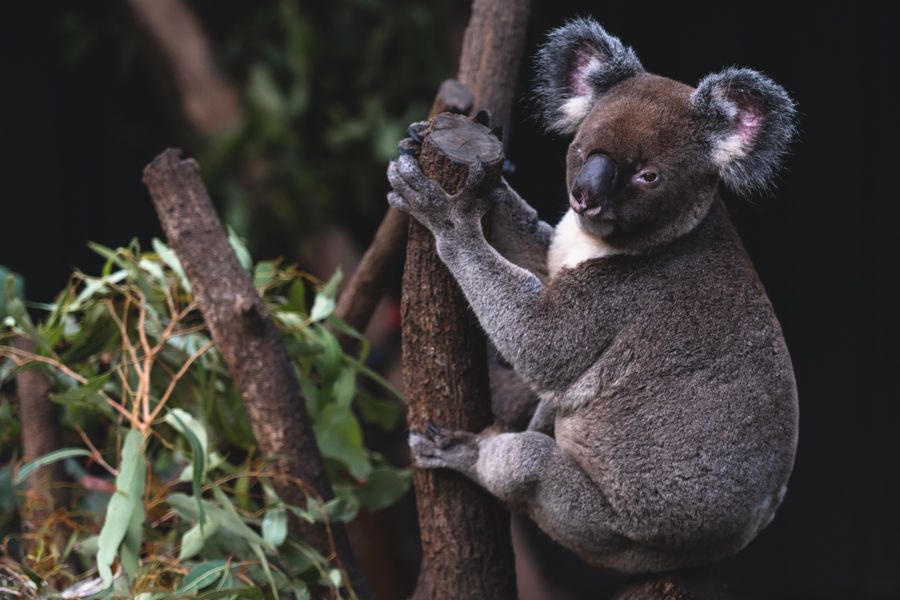 The Wonders of Catseye Beach

After our Aussie animal bucket list tick-off, we thought we’d be remiss not to check out the famed Catseye Beach, and headed down to the resort centre passing the swim-up bar (which we thought we’d definitely not miss out on later on). Down at the Beach Sports hut, they had everything you could imagine in the way of non-motorised water sports. Stand up paddleboarding seemed like an invigorating option, and the calm water was the perfect place for us to test our balance. 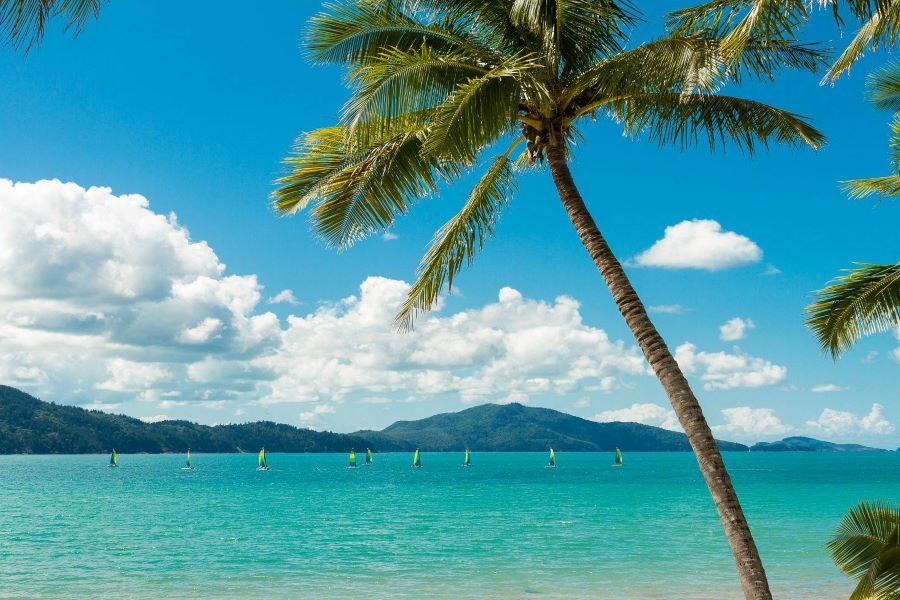 Once we got the hang of it, we were amazed to see a sea turtle peeking up from the water! He seemed comfortable with us in the water and we followed him around for about 10 minutes before he gracefully dove down, likely in search for some grub. There is beautiful fringing reef further out, and found out from the staff at the beach hut they offered several tours, including snorkelling and even a turtle discovery tour! Apparently, there are several resident sea turtles who have made Catseye Bay their home, so its nearly impossible not to run into one when you're in the water or walking on the shoreline. 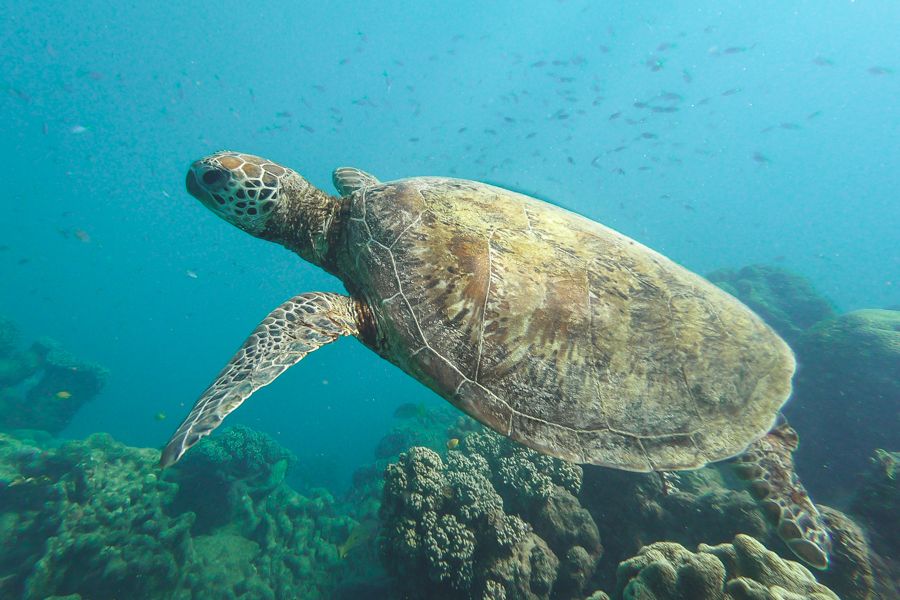 After returning our boards, it was finally time to indulge in some pool time, and the swim-up bar and plentiful sun loungers topped off the perfect afternoon. It was only on our way back to the marina to catch the ferry that we spoke to some other guests who had returned from an ATV tour up in the national parks that we realised there was so much more to experience on this incredible island paradise. We will definitely be back, next time for a couple of nights! 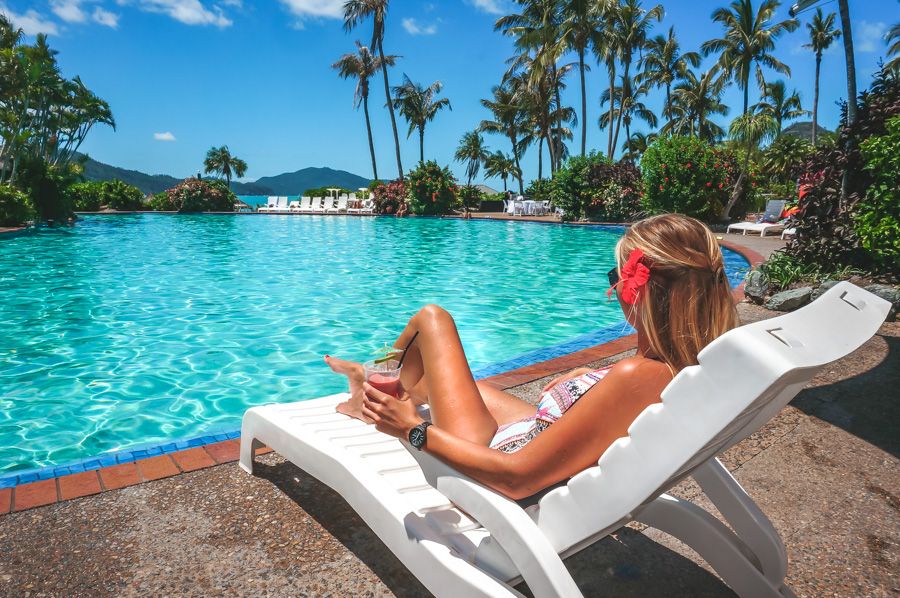 If you’d like to see what Hamilton Island has to offer for the day, or even overnight, chat to our friendly local travel team to find out our latest deals!