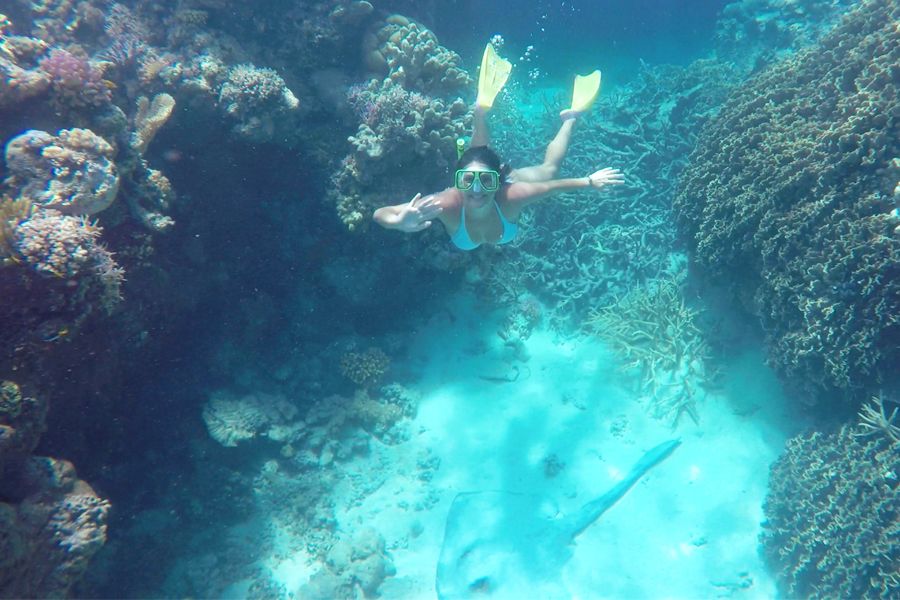 Stingrays are common throughout the Great Barrier Reef and Whitsundays. They are often spotted hiding underneath corals or near reefs and are commonly spotted at Whitehaven Beach, living in the shallows of Hill Inlet.

Stingrays are related to sharks and have cartilage instead of bone. They are flat and wide with a long whip-like tail and live on the bottom of the ocean, where they hide in the sand and feed. Their teeth are also flattened to crush shellfish rather than cut them, making them adapted for living on the seafloor. Stingrays swim by the motion of their large pectoral fins which are commonly mistaken for 'wings' and move them in a wave-like fluid motion. On their tails, there is a jagged barb, (also known as a stinger or spine), which is razor sharp.  Their tails can grow up to 37cm long and their barb is used in self-defence. Similar to bees, stingrays will lose their barb once they've struck, so they don't use them unless it's a life or death situation. They immediately begin to regrow a new one and will go through several throughout their lifetimes.

On the underside of the spine are two grooves containing venom, which are only used as a last resort for these animals. While most species of rays have venom, few are actually deadly unless you're stung in the chest. Their first act of defence is to swim away, which they can do very quickly! Best practice if you are walking in the shallows is to shuffle your feet in the sand to let them know you're coming. 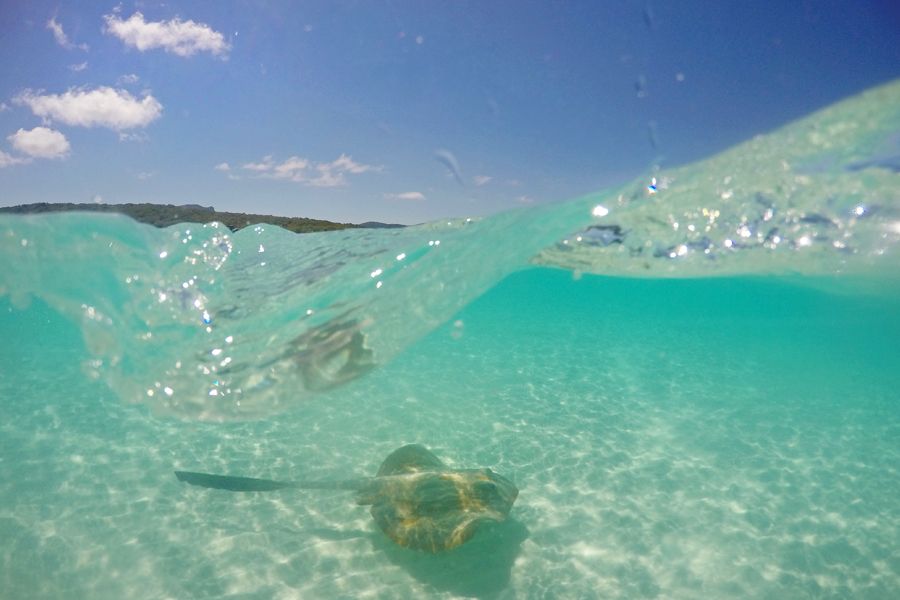 They are extremely docile creatures and are an amazing sight to see while snorkelling or at the beach. However, when attacked by predators or stepped on, they whip their tail around to stab and inject their attacker with their venomous barb. Due to their size and their tendency to live on the ocean floor, if a human is stung, it is generally in the foot or ankle area. It is very unlikely to be stung by brushing against a stinger and generally only happens it the stingray itself strikes you. Being stung by a stingray in the foot or ankle isn't too serious and requires little medial attention, although it may hurt a bit!

There are a few types common rays around the Whitsundays, including Manta, eagle, the spotted fantail and shovelnose rays. Manta rays typically migrate in the winter months, but many different species can be spotted year round. Eagle rays get their name for their pointed "wings" and can be seen jumping out of the water appearing to fly! Spotted fantails are a favourite around the Whitsundays, as they have a neutral base and incredible electric blue spots, making them one of the most beautiful rays. Shovelnose rays are commonly mistaken for sharks from above, as they have fins and a long tail, however if you were to look underneath you would see their mouth, nostrils, and gills!

You will often see them while visiting the beautiful Whitehaven Beach or snorkelling in one of our many reefs. Keep an eye out for their tales sticking out from beneath the coral and do your best not to scare them - they can move pretty fast if they want to get out of your way! If you're visiting Hill Inlet Lookout on Whitehaven Beach, you can also spot stingrays dotted throughout the shallows below, visible from way above from the lookout even with the naked eye.

Want to visit these amazing creatures in the wild? Chat live to our friendly and knowledgable staff to find out about our latest deals on tours to Whitehaven!

New Horizon
"Great time on the 2 day 2 night trip. Met the most lovely people and was nice having the option to p..."
Ellie
CW: Hamilton Island Freestyle
"My family and I were looking for a tour were we had the freedom to do our own thing and Sailing Whit..."
adrian
Hamilton Island Reef View Hotel
"Beautiful big room with two double beds and the view over the ocean is amazing! For breakfast you pa..."
Marina