The Maori Wrasse is the favourite fish of some of the staff at Sailing Whitsundays. A truly incredible animal in appearance and size, which can grow as big as the divers themselves! Swimming with big wrasses will be the highlight of your dive or snorkel in the Whitsundays in the Great Barrier Reef Marine Park.

Napoleon wrasses are the largest of the wrasses having a length up to 7.5 feet (229 cm) and weighing up to 420 pounds (191 kg). The females come in drab shades of grey, red or brown. The males are a light green to aqua with a squiggly pattern on the head and body. These fish are easy to spot on the reef, not only because of their size, but also because the adults develop a bulky bump on the forehead and have big plump lips. A pair of spiky teeth stick out of the mouth. 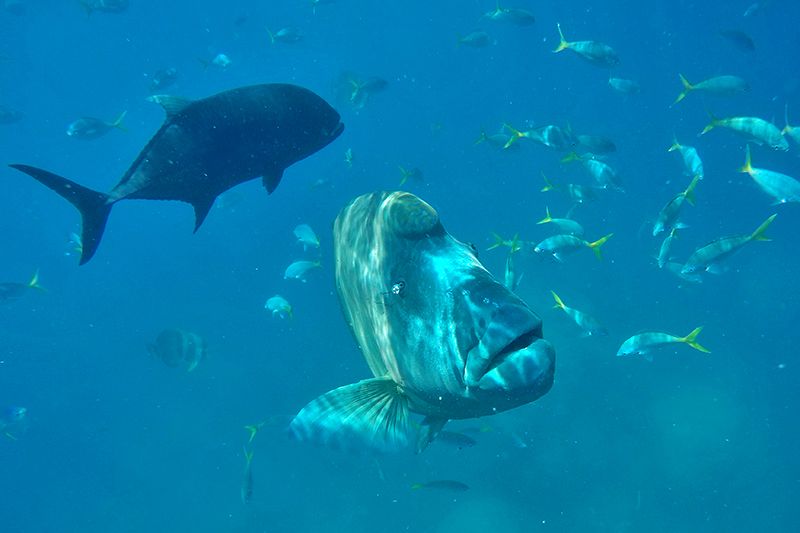 Living alone or sometimes in pairs, napoleon wrasses live on lagoon reefs and steep outer reef slopes at depths of 3 to 200 feet (1 to 60 m). Diurnal or active during the day, this wrasse can be seen roving the reef. At night, the Napoleon wrasse heads home to rest in a reef cave or under a ledge. If chased after by a predator, this fish will dive into its resting place for safety. They are territorial and will live in the same lagoon or reef system for the majority of their lives. 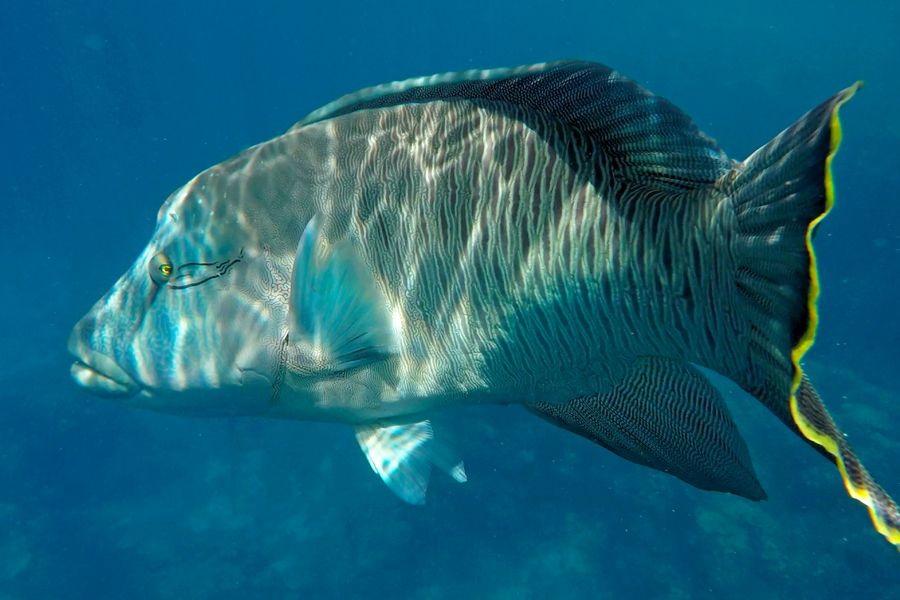 The humphead mainly feeds on creatures most other fish won't touch. Besides eating clams, snails, shrimp, crabs, sea stars, brittle stars and fish, this large wrasse eats dangerous or toxic animals like sea urchins, the crown-of-thorns sea star, and boxfish, as the wrasse is immune to their venom. Prey can't hide inside the crevices from Napoleon wrasse. This wrasse can jut its jaws in front of its snout, allowing the fish to pull prey out of reef holes and crevices, with a secure grip. This big fish also hunts concealed prey by biting off the things they're hiding under like coral branches and tables, or blowing powerful jets of water out its mouth at the sand, uncovering any hidden creatures. If escaping prey dives under a rock on the reef frantically searching for safety, the Napoleon wrasse turns over the hideaway with its powerful jaws. 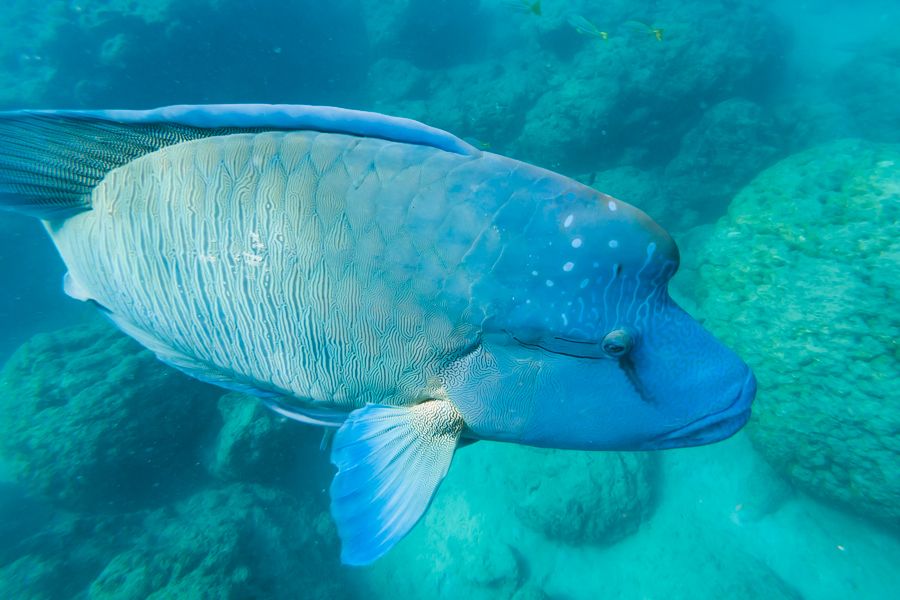 Wrasses start their lives either as a male or a female, just like any other fish, but they can also change sex! These fish are protogynous hermaphrodites, which means they can start their life as a female and then change to the male. Wrasses are born with both male and female sex organs. After wrasses become adults, they are called initial phase males or females. Those that were born male will always remain as an initial phase male and will never have a chance to be a dominant male. Some of the adult females will change into males, especially if one dies and a spot opens up to become "supermales."

These males and the remaining females are also called initial phase wrasses. Some of the larger females will become supermales, occurring when a supermale dies. The supermale is larger than all the other males and has distinct colours and patterns on its skin. This colouration attracts the females to the supermale. Sex change in wrasses ensures there will always be a male to reproduce with all the females. The few supermale wrasses on the reef sport brilliant hues to attract all those females. Initial phase males are different from the supermales. When courting the females, the colour of all the males will actually become brighter and more brilliant.

Terminal phase males breed with a harem or a small group of females. The supermale is territorial which means it protects a certain area and the females there too. Wrasses are pelagic spawners, which means they gather in groups in areas where the fertilized eggs will be taken by the currents. The eggs float in the epipelagic zone or the zone in the open ocean near the surface. Here the eggs hatch out and the larvae float along until they reach a certain size. After they are large enough, the young wrasses drop down and join the other reef creatures. 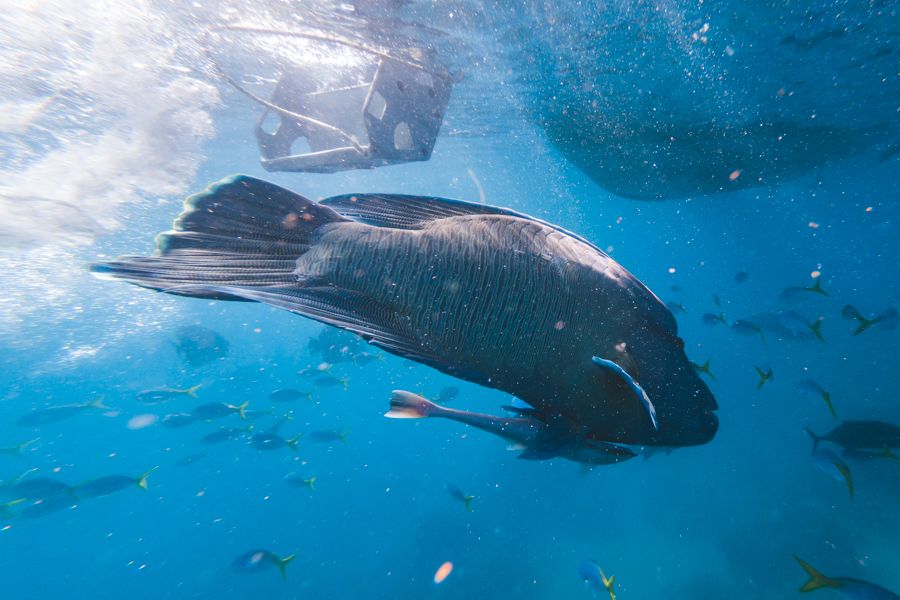 Maori Wrasse in the Whitsundays

Since the Maori wrasse is territorial, you can spot them in specific locations in the Whitsundays every day! One of our famous resident wrasses is called "George," and resides in Mantaray Bay. Several overnight charters and day boats will take you to this spot so you can grab a selfie with the big kahuna himself. Other locations include Blue Pearl Bay and Reefworld pontoon.

Would you like to meet our local resident Wrasses in the wild? Chat to our local travel experts about the best tour to choose, or check out our latest deals here! 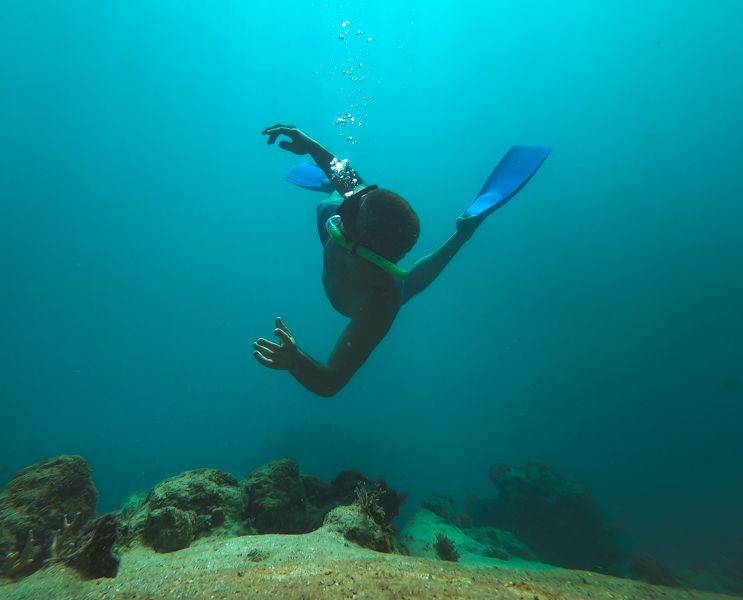