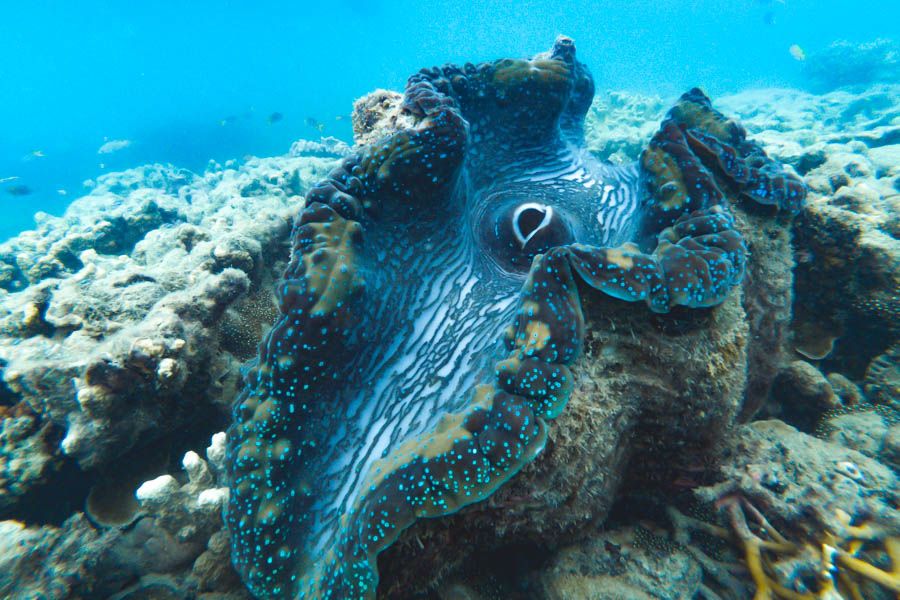 While the Whitsunday Islands and surrounding reef offers a fantastic display of unique wildlife, one of the most interesting and peculiar species is the Giant Clam. While the Giant Clam is severely endangered in many places around the world, it grows abundantly around the Whitsunday area and is a common attraction for snorkellers and scuba divers.

Residing on the seabed in depths of up to 20m, the Giant Clam feeds almost exclusively on algae. This allows it to grow to a substantial size, up to and over a metre across, weighing over 200 kilograms. During reproduction, the Giant Clam produces both eggs and sperm. Larvae will hatch from a fertilized egg after around 12 hours, and will then swim for several days while it grows a shell. It will settle on the ocean floor after one week, although it may frequently move about over the next month as it searches for its ideal location.

The Giant Clam has its place in legends like many other unusual underwater species. Once known as the Man-eating Clam, it was considered dangerous to divers and swimmers, with many legends of the Clam suddenly closing over an arm or leg, or even swallowing a whole person. While the Giant Clam certainly does close in self-defence, it is incapable of suddenly snapping shut. Some of the largest Clam specimens, the ones thought to pose the greatest threat, are unable to completely close their shell.

The Giant Clam, while remaining an endangered species, is considered a food source in several parts of the world. The Clam’s muscles (the abductor muscle) is considered an aphrodisiac in China, and research has shown that consuming the muscle can increase the level of sex hormones in the human body.

Despite this, the Giant Clam is still abundant among the Whitsunday Islands and is well known as one of the most interesting and beautiful species to be seen under the water.

For more information on other interesting marine life you can expect to find in the Whitsundays, click here.