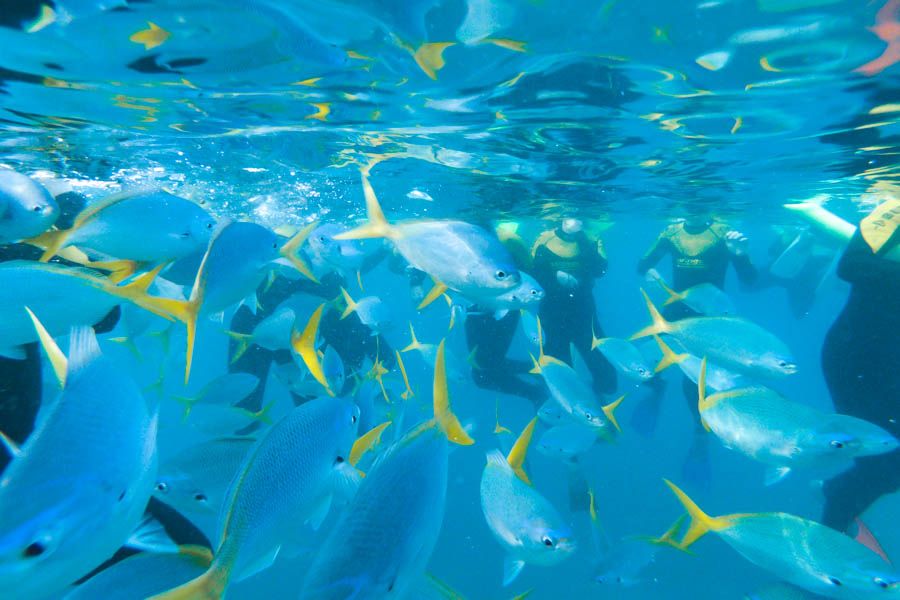 Sweetlip
Look for the beautiful Harlequin Sweetlips in caves, cracks and swim-throughs or under big plate coral. This is a shy fish named after his most obvious feature. If you are lucky, you might find the famous "disco dancer". Those are the juvenile sweetlips, usually spotted inside a patch of staghorn coral or in any other good hiding place they are very colourful and they never stop moving in their flaps real quick way that looks like a crazy dance and gave them their name.

Emperors
Emperor is usually found over sandy areas adjacent to reefs where they forage for crabs, sand dollars, fish and other bottom-dwelling organisms. The Red Emperor is one of the oldest fish in the reef living up to 50 years old. Juveniles live in shallow water seagrass beds and mangroves, moving offshore as they grow. Sex changes from female to male occur as the emperor grows.

Parrotfish
Parrotfish are one of the only fish species to sleep during the night by forming a cocoon-like mucus structure, making them harder for nocturnal predators to find. The most common parrot fish around the Whitsunday's is the Six Banded Parrot Fish.

Cod
This is a large group of fish ranging from the small, colourful basslets to the large Queensland groupers.  The most common Cod around the Whitsundays are Honeycomb Cod, Coral Cod, Barramundi Cod and Potato Cod.

Popularised by the film "Finding Nemo," anemonefish are one of the locals you'll find in the Whitsunday waters. Making their homes in the stinging tentacles of sea anemone, the clown fish stay hidden and protected from predators.

This is just a few of the fish you'll encounter in the Whitsundays, to learn more click here.