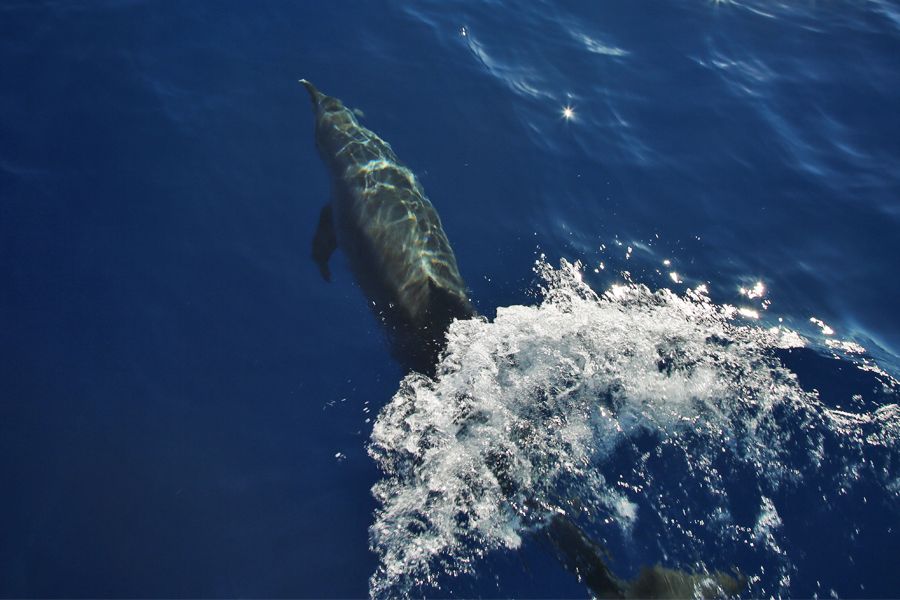 Several vessels in the Whitsundays have specifically fitted underwater blue led lights to attract dolphins. How it works is the blue light firstly attracts squid and then the dolphins are drawn in to feed on the squid. If you want to see this phenomona in the wild then here at Mr Travel we suggest you try Adventurer or Powerplay, both vessels have underwater blue light systems.

The most common dolphins to be seen all year round in the Whitsundays is the easily recognizable Bottle nose Dolphin. These intelligent animals are playful, family oriented animals that never fail to delight the young and old alike. At night you can even witness feeding as dolphins have a sweet tooth for squid and its quite common to see mother and baby feeding around your boat where the food is lit up by the boats lights. Although it is unlikely to see one jump through a hoop while balancing a beach ball on his nose!

The Bottle nose Dolphin is dark grey at the top near the dorsal fin to a very light gray and almost white at the underside, making it hard to see both from above and below when swimming.

The Bottlenose Dolphin is commonly known for its friendly character and curiosity towards humans. It is not unheard of for a dolphin to come up and investigate divers in the water.

Bottle nose dolphins feed off small fish with occasional squid, crab, shrimp and other small animals. They will work in a school to maximize the harvest. They can surround their prey and heard them in a bunch just like a cattle dog working sheep.

Dolphins search for prey primarily using echolocation, which is similar to sonar. They emit clicking sounds and listen for the return echo to determine the location and shape of nearby items, including potential prey. Bottle nose Dolphins also use sound for communication. Sounds used for communication include squeaks and whistles emitted from the blowhole and sounds emitted through body language, such as leaping from the water and slapping their tails on the water. There have been numerous investigations of Bottle nose Dolphin intelligence. Such testing has included tests of mimicry, use of artificial language, object categorization and self-recognition. This intelligence has driven considerable interaction with humans. . They have also been trained for tasks such as locating sea mines or detecting and marking enemy divers. In some areas they cooperate with local fishermen by driving fish towards the fishermen and eating the fish that escape the fishermen's nets.