Parrot Fish of the Islands 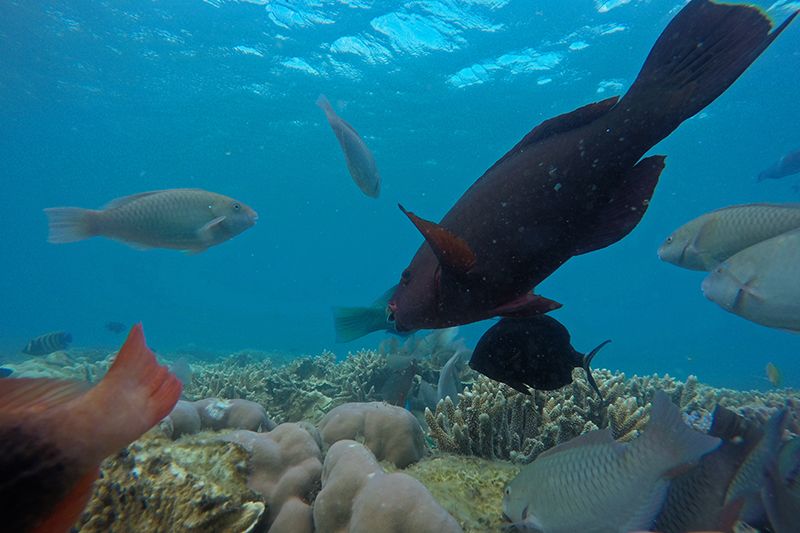 Tropical parrot fish are many beautiful colors of the rainbow. Those are everybody's favorite, from the huge bump headed parrot fish to the schools of smaller ones grazing on the reef. they can come in any colour or combination of colours including purple and even pink! they are very common on our reefs and add a spectacular show of colour and life. their name comes from the colors and the beak like mouth used to scrape coral for food.

They are often seen formed in large schools grazing over the reef and have often been likened to grazing cattle. While snorkeling and diving you can hear the parrot fish munching loudly on the coral.

Parrot fish do not have a stomach. The algae is crushed by a secondary jaw and processed into a very long intestine.

Parrotfish numerous teeth are arranged in a tightly-packed mosaic on the external surface of the jaw bones, forming a parrot-like beak with which they rasp algae from coral and other rocky substrateswhich contributes to the process of bioerosion.

Although they are considered to be herbivores, parrotfish eat a wide variety of reef organisms, and they are not necessarily vegetarian. Species such as the green humphead parrotfish include coral (polyps) in their diet. Their feeding activity is important for the production and distribution of coral sands in the reef biology, and can prevent algae from choking coral. The teeth grow continuously, replacing material worn away by feeding. The pharyngeal teeth grind up coral rock the fish ingest during feeding. After they digest the rock, they excrete it as sand, helping to create small islands and the sandy beaches of the Whitsundays. One parrotfish can produce 90 kg of sand each year.

Parrot fish are a main contributor to the creation of sediment on a reef, as they expel fine particles of limestone that are consumed during feeding. Parrot fish exhibit the same reproductive and color patterns as wrasses so quite often people can get the two confused. Parrot fish are one of the only fish species to sleep during the night by forming a cocoon-like mucus structure at night, making them harder for nocturnal predators to find. The most common parrot fish around the Whitsunday's is the Six Banded Parrot Fish.