Birds of the Whitsundays 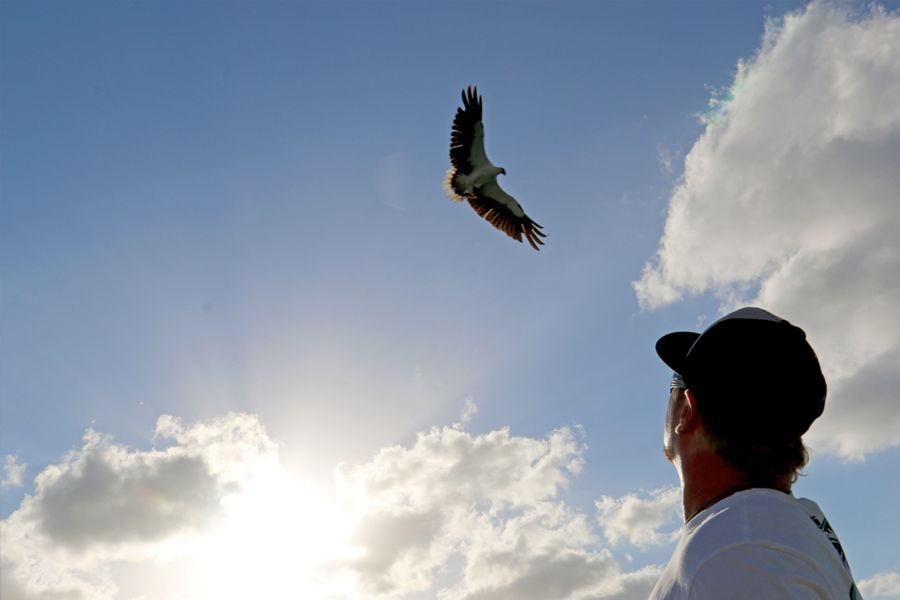 The Great Barrier Reef Marine park is home to an estimated 175 bird species, many of which live permanently in the Whitsundays area. With a variety of birds, from high-fliers to those that wade in the shallows, you can see every combination of colour, size and mannerisms in the beautiful abundance of birds in the Whitsundays.

Sulphur-crested Cockatoo: Easily identified by their large size, black beak, white body and yellow plume, the Sulphur-crested Cockatoo is often seen cruising the skies of the Whitsundays, calling its prehistoric call for all to hear. This parrot species can be found throughout most of Eastern Australia and is definitely one of the country's most iconic birds. They have a yellow underside that can be seen from below, and are often found perched in trees eating bark and leaves or on the ground  picking at seeds and nuts. They are highly intelligent and are popular pets in Australia and all over the world, living up to a century in captivity! They can learn human language, as well as learn to mimic other bird calls and households sounds, making them a cheeky housemate.

Laughing Kookaburra: This stout, big-beaked native can be found throughout Eastern Australia as well as part of Western Australia. Its body is mostly brown with a white underside and head, tipped with a oversized beak. They'll feed on mostly anything from bugs to small mammals or snakes and have been known to linger around for human scraps too. You will often see them in pairs as they are thought to mate for life, often only have one clutch a year and taking time to raise their young. Their call, known affectionately as their laugh, is the source to many stories, nursery rhymes and is embedded in the history of Australia.

Red-tailed Black Cockatoo: While it is only the male that has the red tail and plumage, the Red-tailed Black Cockatoo is known for its impressive size, bright colouring and black beak. The females, on the other hand, have more of a yellow colouring, with yellow spots on their head and neck with yellow throughout their feathering and underside of their tails. They are noisy and can often be seen in flocks of two of three and have been known to fly in groups of up to 500. They are pretty shy of humans, so you're not likely to entice these guys with snacks!

Rainbow Lorikeet: Lorikeets are a member of the parrot family and named appropriately for their rainbow plumage, you will see these little guys in the droves in the Whitsundays, hanging out in the treetops or flitting around the skies in the dozens. Predominately green with a blue face, and a orangey red breast, you will catch Lorikeets eating the pollen in flowering trees, fruits, seeds and bugs. They are pretty chattery and when hanging out in large groups, can become quite loud!

White-bellied Sea Eagle: Found on most of the coasts of Australia, the White-bellied Sea Eagle is a common sight in the Whitsundays, and can be seen coasting over the shorelines looking for its next meal. They have a white head and underside with dark grey on the wings and back, and from below can be identified by this white underside and dark grey flight feathers on the edges of their wings. Their wingspan can reach up to 2 metres and both sexes are similar in appearance, only differently slightly in size (females being the bigger of the two). It feeds mainly off fish, turtles and sea snakes, but is also knows to eat other birds and mammals and isn't above eating carrion.They are the second largest bird of prey in Australia, only second to the Wedge-tailed eagle.

Bush Stone-curlew : With eerily bright yellow eyes and long spindly legs, stone-curlews are often found scurrying in the underbrush looking for bugs, frogs, seeds, frogs, snakes or even mammals to munch on for lunch. As a nocturnal species, you will often see them hunting close to dusk and throughout the night. Known to hiss, scream and screech, it's best to keep a distance so they don't feel threatened.